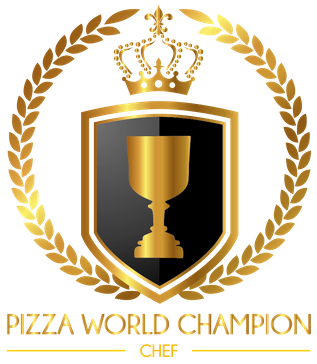 I started baking pizzas when I was 13 years of age, helping out my father after school and on weekends at the pizza shop. I started from the bottom, as the little guy in the back kitchen washing dishes, making tomato sauce from fresh tomatoes, which I balanced out with fresh herbs and spices, making the daily pizza dough, and cutting fresh veggies. At the age of 14, I was promoted to pizza maker on the front line.

I’m a second generation pizza maker following my father who learned to make pizzas in Italy in the late ‘60s. Bringing his pizza knowledge to Sweden in the early ‘70s, he is one of the first 20 people to start a pizza shop in Sweden. Today, there are over 4000+ pizza shops in Sweden.

Pizza is my greatest passion so I decided to expand my pizza knowledge by competing in the World Pizza Championships in Las Vegas. My idea was simple. Don’t focus too heavily on winning and take it as a learning experience. I wanted to see what the rest of the world was up to. I never thought I would win, but I was lucky and got 1st place in the World International(Open II Region). It was one of the best moments in life!

2010 -2015 Prepare food for VIP Room at the Copenhagen Airport. The VIP room is not for celebrity use. Only for royal families and government officials from around the world.

2013-2015 Worked in Denmark for restaurant Le sommelier owned by the legendary Francis Cardenas which has been awarded 2 Michelin Stars.

2013 Denmark Nordic Cooking Theme Event (5 weeks) – Michelin Chefs arrive to Pop Up Restaurant and offers Michelin quality food prepared with local high quality ingredients right before the customer’s eyes. (Mikkel Marshall, David Johansen – Master Chef Judge, Thomas Rode, and myself as Management and front of the line chef). The theme event won a gold medal award for Best Pop Up Restaurant from all the airports from around the world.

2013 Consulting for Claus Meyer and his team, ideas and recipes for pizza (Claus Meyer the owner of NOMA which has won World Best Restaurant 3 times in a row and has 2 Michelin stars).

2014 Claus Meyer – New Pizza Development (3 day event). Claus asked me to manage and develop new pizza ideas together with him for his Pizza Event. We even had a pizza work shop for children. It was super popular! The children got to bake pizzas for their parents and received diplomas signed by Claus and myself. The diplomas also stated that the children were now official Pizza Makers. It was a true honor to work with Claus. He is real cool guy!

2014 Became one of the Founders of the Swedish Pizza Association.

2014 PMQ Magazine – picked as Scandinavian Pizza expert in the field.

2014 Pizza Today Magazine, I was 1 of 20 selected Pizza Chefs from around the world to be part of the menu guide.

2015-Judged the Scandinavian Pizza Championship in Denmark, with Tanja Tomic and Gorm Wiwesh-TV Chef and a Pizza Icon in Denmark.

2015 Was one of the lucky judges to judge The World Pizza Championship in Italy -Parma a 2-day event, many Italian pizza icons and TV Chefs were part of the judging. Over 650 pizza makers came from the around the world to compete. Very good experience and very nice to be able to taste pizza from all over the world. This experience enrichened my knowledge in the pizza culture and it has expanded new ideas for taste and flavors.

2015 Judged the Chinese Pizza Championships for (3-day event in Shanghai).

2015 Live pizza baking show for the Swedish radio station P4. Presented the famous Volcano Pizza live on air and a small document clip was made from the show by the station.

2015-2016 Head Chef for Scandinavians most popular pizza shop, known as the million-dollar pizza shop due to monthly pizza sales being around a Million dollars. I was part of this project and helped design the kitchen layout for efficient work area and presented great ideas on how to increase sales with add on menu items, put together Scandinavians best pizza team to help run the pizza shop. I also handled the scheduling and training program. I screened and recruited new employees who had the experience to deal with a busy store. The team and I set up the whole concept with portion control (grams).

2016 Made Sweden´s first black dough pizza for the media channel called Malmo24 TV. The media wanted something that Sweden has never done yet, and that’s where I showed the Swedish public the new trendy black dough from Italy.

2016 One of the Judges for the World Pizza Championships in Italy -Parma (3-day event, Italy). 650 pizza makers came to the Championship from all over the world, it was a true honor to be a judge. It was a great event to meet other passionate pizza makers like myself.

2016 Judged the Russian Pizza Championship for 3 days in Moscow.

2017 One of the judges for 3 days at World Pizza championships culinary pizza show in Italy.

2017  Was One of six lucky Pizza Chef from the world to be featured in the itlay pizza trend magazine (Pizza e Pasta Italina) with recpeies from Sweden.

2017 Helped one of China's biggest pizza chain stores ( 82 pizza shops) with the pizza menu ideas and menu marketing . A live show on stage with presentation was made for the menu in front of 300 people in China.

2017 Judged the Shanghai Pizza Championships for 3 days in China at the largest restaurant expo show.

2018 On Tour with Pizza Champion Cup Championships 2018 From  Stockholm -Göteborg looking for the best of the best pizza makers in Sweden  .www.pizzachampioncup.com

2018  Judged for the Italian World Pizza Championships in Parma . 738 pizza makers came to the Championship from all over the world, it was a great inspiration to taste pizza from all parts of the world.

2018 Was a pizza judge at the International Pizza Challenge at LAS VEGAS  during the world´s greatest pizza show called Pizza Expo .  www.pizzaexpo.com

2018  3 days Kids Pizza School at Skånes Matfestivalen ( age 3-15). Teaching how to Baking pizzas with fresh dough and fresh ingredients. A successful event. The parents and the kids were very happy and involved in learning and baking at the same time.

2018 Found new ECO  green way to bake pizza. Baking with the heat of the sun!(Solar pizza baking with Swedish sun)

2018 Helped the national radio with a fundrasing by auctioning of a pizza made be me, all the money broth in went to helping people that needed a little extra help.

2019  Judged for the Itailan world pizza championships in Parma. 784 pizza makers toke part for the competition.

2019 During the European Pizza Championships in London I was honored to be awarded  as a International Judge title plaque.

Upcoming Prebooked Events for beginning of 2020

I have been part of building 9 pizza shops from the ground up in USA, Sweden, Denmark, and in Budapest. I have learned to read blueprints as well as to carry out basic electrical work.

*Full understanding in restaurant machines and have a wide knowledge in choosing the right equipment and restaurant furniture.

*Create menus from for the pizza shop, even seasonal menus.

*Schedule a routine for the shop.

*Build new brands (i.e., from concept) with logos and design.

Hotel & restaurant magazine by the union

and alot more medias around the world